As you may have noticed recently, Apple released the iPhone 6 and 6 plus.

A joyous occasion for many apple fan boys (and girls) and a way for Apple to deflect some of the attention away from the celebrity nude pictures leaked from Apple's "secure" iCloud. Not only did Apple contradict their previous mocking statements over Samsungs bigger smartphones with the plus, they produced a product that apparently bends in people's pockets.

What you may have also noticed on Twitter is the hash tag #bendgate which prompted a number of companies to mock the tech giant.

Here are some of the best campaigns!

Not a company I apologise, but it was too good not to share. Jonas Daehnert's image of the "Dali edition" of the iPhone 6, posted on deviantart, went viral with many re-tweeting or reposting the picture on Twitter and social networks alike, not only is it very clever it's very well designed!

Looks like Dali got his hands on the new iPhone 6 Plus. http://t.co/kdk5DkoopV #BendGate pic.twitter.com/grif4RkAbG

You'd expect competitors to mock the iPhone (more on them later), but even food companies were jumping on the bandwagon to take a shot at Apple. Pringles posted a tweet being a little empathetic to iPhone (although openly mocking them).

Again not what you'd expect from a non rival, but Kit-Kat were quick to tease iPhone.

#Bendgate fell right into LG's lap for their "G flex" smartphone, already designed to be bent (rather curved) they posted this on Twitter!

As iPhone's main rivals, you'd expect Samsung to react to the controversy. There has been quite a bit of tension between the brands over the years, with iPhone suing Samsung due to similarities of their operating system (even though Apple use a lot of Samsung manufactured components). So you'd expect a pretty good reaction and they delivered! 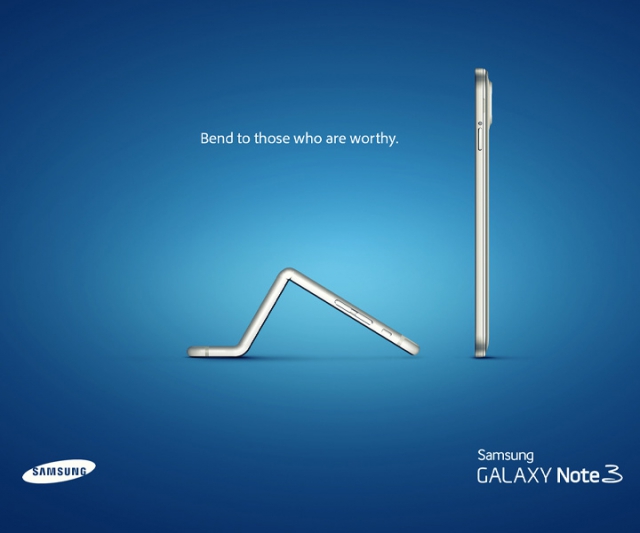