For ideas on how to support you as you grow your business.

The Good, the Bad and the Ugly (Re-branded logos)

A good logo should be and do a number of things, and do them well.

It’s the first port of call for clients and consumers, so it needs to communicate your brand values over in an effective way. An effective logo is one that people immediately recognise, brand awareness is essential for many companies, you ideally want your company in the mind of your audience as much as possible, you want people to walk down the street, see your logo and immediately recognise that that’s your company. It helps to differentiate your brand in a sea of company identities. A logo should be simple, relevant, memorable, versatile, and timeless. You want your logo to stand the test of time, not have to change it every couple of years because it’s dated, it costs money and at the end of the day you want your logo to be constant, something that stays the same and that people recognise.

A good comparison is that of Coca-Cola and Pepsi

Coca-Cola since they began have stayed relatively constant with their simple signature logo and brand and because of this they are recognized worldwide.

In contrast Pepsi have constantly re-branded their logo, in a somewhat futile effort as now the new logo has been ridiculed as looking like a fat man’s belly, a rather ironic criticism, as their product has been linked to worldwide obesity, NOT the type of values I was talking about getting across! 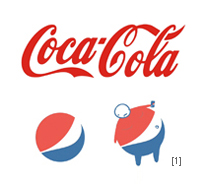 Coca Cola and Pepsi re-brand over the years:

If you didn’t already know, syfy is quite a world renowned slang term for syphilis. Hilarious for everyone else, but not for the Si-Fi channel, as they are now associated with a venereal disease. Again not the values you want to convey.

Another well-known re-brand failure was that of Animal Planet. Their new logo is an example of dreadfully communicating your message across. Gone is everything that associates the channel to nature, and replacing it is a squished mess and a horizontal M.

Mastercard had no real need to re-brand the logo, they had a strong logo that was well recognised. All good logos are simple, this is what their original logo did well, it wasn’t complicated. The re-branded logo set to complicate the matter by adding unnecessary elements, making the new logo look hectic and confusing, a good re-brand makes a logo more simple not more complicated.

Back in 2010 GAP decided to re-brand their logo. However this was much to the displeasure of consumers, with thousands of people taking to social media to complain about the new logo and even create a website called “Make your own GAP logo” in which 14,000 new logos were created, mocking GAP’s re-brand. This was a very embarrassing, costly and unnecessary re-brand for GAP, and one that could have been avoided.

Now that we’ve seen the bad re-brands, let’s look at the logos that have been effectively re-branded:

Apples first logo in 1976 was very quickly updated, as it was too complicated, it featured Isaac Newton sitting below a tree, with the famous apple lingering above his head ready to drop and spark his gravity realisation. I get what Apple were trying to convey here, linking Isaac Newton to great ideas and thus trying to link that with their products. Apple’s logo since, has changed very little, only in colour. It now represents all the values that Apple want to communicate and associate with their products, in that they are simple, sleek and high-quality. 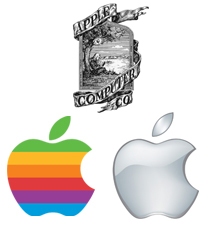 KFC have re-branded a couple of times, placing more and more emphasis on Colonel Sanders. KFC did need a re-brand, their old logo looked dated, their new logo, with bold lines is a lot more visually striking in a way that grabs your attention. The logo communicates a lot more family values, as it feels as though the Colonel has taken on a fatherly/grandfatherly type role, as his suit has been replaced by an apron, making it feel much more family friendly and inviting.

Without a doubt my favourite logo, and a lot of you won’t have figured out why. Well let me explain, if you haven’t already noticed there is an arrow in between the E and X. (By the way this was pointed out to me, I was also rather naïve to the revelation). What the FedEx logo does fantastically well, is convey the speed and reliability the courier service has with the use of the negative space which creates the arrow. It’s simply genius, it has high brand recognition, it’s so simple yet so clever, and it communicates its brand values in a way that (until now) you never even realised. 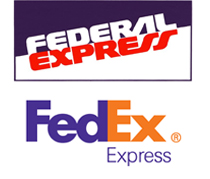 To round up I thought I’d take the chance to talk about Keane Creative's re-brand success.

As mentioned earlier a good logo should represent the values that your company hold, as our business has become more established and changed so has our logo. Our first Keane logo represented a new company, that had something to prove. The logo device above the "n" was a deconstructed "k" that represents growth and moving forward, while the "a" is an upside down "e" and was there to highlight a different way of approaching or looking at a project. We have now been an established company for 16 years, and it was felt that our logo should express our position within the industry and represent our continuous growth and improvement. It's simplified, with bold colours and a "K" and "C" which are fused together to create a robust logo that represents the values we uphold. We are established, bold, professional, creative and intelligent. 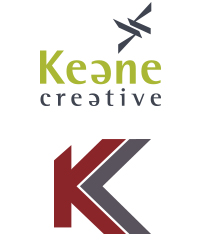 Ben Wilson
2298 days ago
Didn't spot the arrow either, in FedEx. Sneaky.
Interesting to see the good and bad evolution of a brand.
Paul Wintersgill
2298 days ago
I love KFC...even more now that "The Colonel" has donned his apron!
Looking forward to developing our new logo...
Jack Rose
2204 days ago
Personally I haven't got a clue how the deconstructed 'K' was meant to represent growth and moving forward, each to the their own though, some people take the Bible as truth.